Welcome to today’s “Meet this Zinester,” with Clint Marsh, a zinester whose words are pure magic. So stick around, get inspired, and then make zines~

Who are you? Where are you based?
My name is Clint Marsh. I publish Fiddler’s Green Peculiar Parish
Magazine out of Berkeley, California.

What are zines to you?
Zines are the promise of freedom of speech made real. They are a forum
for anyone to communicate their thoughts in an unmediated way that’s
also very personal, because of how zines are sent through the mail.

What was your first encounter with zines?
My first encounter was when I was in high school. I borrowed a friend’s
copy of “The World of Zines,” which was a book of zine reviews by
Factsheet Five’s founding editor Mike Gunderloy. I was already
interested in writing and publishing. The book showed me that there was
an entire subculture of people around the world who would read my work.
I put out my first zine a month after graduating high school. That was
in 1993 and I’ve published well over 100 zines since then.

Tell me about Fiddler’s Green? What is your zine about?
Fiddler’s Green is the result of many, many years of telling myself that
I could write honestly and non-ironically about spirituality. It took a
long time, but I finally listened to that voice. As it so happens, there
seems to be a ready readership for this type of writing, as Fiddler’s
Green is the most popular publishing I’ve ever done. 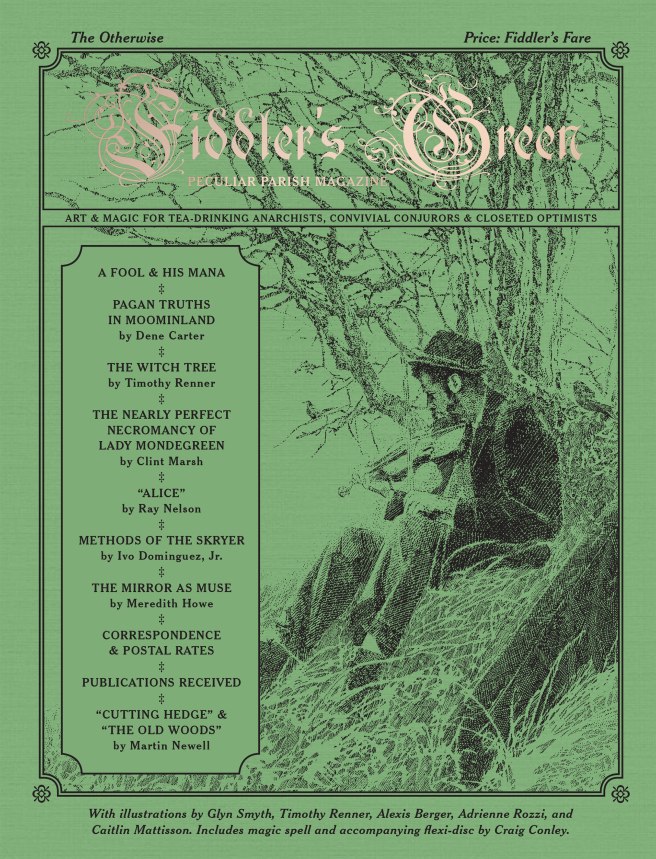 The first issue of Fiddler’s Green laid out my own relationship to
spirituality, which is one that involves no mediation by the Church and
involves practical magic. I present moments from my everyday life —
driving the car, having a pint with a friend, going for a walk wearing
my late grandfather’s boots — and I describe how I find connection to
spirit and magic in those moments. I try to write with enough openness
that anyone can recognize such moments in their own life. Fiddler’s
Green seems to have struck a chord because now the zine gets so many
contributions of writing and illustration that my voice is one among many.

What inspires you to create zines?
It feels natural to me. I grew up in the country, in a time before the
World Wide Web, and when I met someone who lived far away I would often
keep in touch with them by writing letters. Fiddler’s Green feels like a similar way to do that, although now there are a few thousand people I’m
keeping up with that way!

What’s your favorite thing about zines?
I like the social and individualist aspects of zines. Getting one in the
mail feels really special because I’m always so interested in how the
publisher puts together each issue. It’s fun to mail someone a few
bucks, or a copy of my zine, and see what comes back. There are dozens
of people I consider my friends whom I’ve never met because they’re far
away and we only communicate through these intermittent, artistic
correspondences.

Do you recall your first zine ever, what was it about and what
inspired you to create it?
I made a little-typed newsletter when I was in grade school before I
ever heard of zines. It was full of stories of injustice my friends and
I were facing at the hands of the school authorities. Honestly probably
nothing! Ha. It only lasted an issue or two, but I already understood
the power the independent press had to amplify the voices of the
underdog. In this case, the underdogs were a handful of 11-year-olds.
When I was 18 I published my first proper zine, stapled and everything,
printing interviews with my friends and reviews of stuff we liked. The
two publications were actually quite similar in spirit, although the one
I made when I was 18 had photos and a questionnaire for readers to fill
out. I made 50 copies and I still have one or two of them.

Tell me a little about your zine-making process.
Each zine series I’ve published, and I’ve made about ten so far, begins
with an image of a world that’s very similar to our own but different
enough to make it more interesting than everyday life. I published four
issues of a zine called Phooka that was about a group of drunken
aristocrats who played croquet and could see fairies but were annoyed by
it. Another zine series was all about the aetheric plane, which is a
place people can tap into to develop psychic abilities. Fiddler’s Green
is named after a legendary afterlife for sailors, soldiers, and other
adventurous people. I liken my own spiritual journey to an adventure, so
Fiddler’s Green is the place for me. Once I’ve established the world
it’s really just a matter of sitting still long enough to write about it.

What do you hope people get out of your zines?
My big hope with Fiddler’s Green, and probably with every other series
I’ve done too, is that readers realize that they’re not alone. I was a
weird kid, and even though I felt okay about that at the time, being
weird brought with it a certain loneliness. We’re living in a very
different world now, with the internet putting all the weirdos in touch
with each other instantly, yet there’s clearly something more that comes
through in zines. It’s the tactile element, the sense that, simply
because someone far away put a zine in an envelope and mailed it to me,
I can feel a much richer connection to them than to any number of people
I’m talking with online.

Name two of your favorite zinesters.
Top of the list is always Peter Good, of the Cunningham Amendment. He’s
old-school, meaning if you want a copy of his zine, which is a
letterpress-printed masterpiece of anarchistic thought, you have to mail
him a letter. He’s at The Cunningham Amendment, Room 6, Tangleford
House, The Street, Bawdeswell, Norfolk NR20 4RT, England

Another terrific zinester is Anthony Walent, who publishes Communicating
Vessels. Anthony lives in the desert and writes a lot about philosophy
and history and just walking around. I love that he’s not as jaded as
many of the anarchist writers I read, and his zine is beautiful. You
have to post letters to him too, as there’s no website: Communicating
Vessels, Post Office Box 2048, Tucson, Ariz. 85702

Is there a zine website or resource you would recommend new
zinesters to check out?
Xerography Debt is a long-running review zine with self-described
“perzine tendencies,” meaning that the editor and contributing reviewers
put a lot of their own voice and personality into the writing. You can
order it from leekinginc.com. Reading an issue of Xerography Debt can
help new zinesters get the lay of the land, see what’s being published,
learn about the other folks in the scene, and read about the various
struggles and triumphs that people face as they send their quirky
publications out into the world. There’s something very intimate about
getting a new review zine in the mail. It’s an experience that can’t be
replicated online. You find out about all these great little reads, you
order a few by tossing some cash in the mail, and, if you can keep from
looking them up online in the meantime, you just have to wait and see
what they’re really like once they arrive. These days, that’s real magic.

Do you have any advice for new zinesters?
I’ll give the new kids the same simple advice I would give myself if I
could go back in time: Be Yourself. There are a million ways to be
someone else, but guess what? You’ll never do it as good as they do. But
no one can be a better you. Now, it can take time to figure out who
exactly you are and get good at it, but the great thing about zines is
that they’re episodic. So just start publishing and over time you can
see your own creative and personal trajectory. Also, order a lot of
zines from people so you can see what else is being made. There’s so
much good stuff out there. The zine world is getting better all the time.