I love zines! I love everything about them. I love the DIY aspects of them, the creative process, the communities it creates, and the fact that everyone is so willing to help each other bring zines to life. It’s an amazing community of writers, artists, creators, and awesome people. So this is why I am so thrilled to introduce today’s “Meet this Zinester,” Jolie Ruin. She embodies everything that is amazing about zines. So stick around, get inspired, and then make zines~

Who is Jolie Ruin? Where are you based?

I’m a zinester and collage artist. I run Riot Grrrl Press. We make t-shirts, tote bags, patches and other fun things. I’ve been doing zines for 20+ years. I currently do 3 zines: “The Escapist Artist”- which is a personal zine. “Double Chinchilla”–an art zine, and a review zine called “Riot Grrrl Reviews”. I’ve been doing collage art for about 10 years. I love Riot Grrrl, cats and comedy.

I live in Indiana with my husband Jamie and a bunch of cats.

What are zines to you?

Zines are life! I’ve been doing zines for so long; I can’t even imagine my life without them. It’s been kind of a therapy for me for most of my life. Just reading other people’s stories and having people read mine. I’ve gone through a lot of stuff and writing about it always made me feel better. I write every single day, I’ve been keeping journals since I was about 13 years old. So l feel like I HAVE to write and that’s why I still do zines. 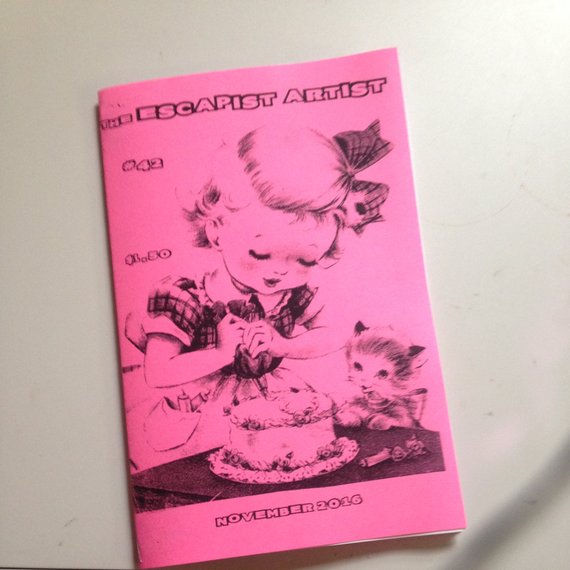 What was your first encounter with zines?

My first encounter with zines was Maximum Rock & Roll, sometime in the mid 1990s. My older brother and his friends would have copies of them lying around. I started pen-palling when I was 15 and that’s how I came into contact with other zines. The first Xeroxed Riot Grrrl zine that I read was done by two girls that were my pen-pals in 1995. It was called “Dust Cake Girl”. I read about zines and Riot Grrrl in “Sassy Magazine” around that time but I’m not sure I ever would have gotten that into it, had I not been writing to other people that were into it and doing their own zines. The girls who wrote “Dust Cake Girl” also told me that they were trying to start their own DIY record label and I was just like, “Wow, I want to do that”….so I did.

I would love to know more about your DIY record label. It sounds really cool. Does it have a name? How did it work exactly? What kind of music did you guys make? Who was involved? Tell me about it.

In 1996 I started compiling a music and spoken word cassette called “riot!” I had read (in zines) about a few other girls that were doing compilations and a few people had their own DIY tape labels. Even Tobi Vail had one back then! It was called Bumpidee. I had also started recording my own spoken word cassettes to send out as trade for zines since I wasn’t doing my own at the time. And I released those on “Dead Meat Distro”–which became “Ego Records” in 1997 when I finally had enough stuff to put out the “Riot!” comp….It took over a YEAR to compile it since there was no social media back then, everything was by word of mouth! I made ads for other zinesters to put in their zines, I put a classified ad in MRR….it took a very long time! It ended up having lots of different kinds of music on it. But it was mostly Riot Grrrl.

Ego Records was always run by ME, and only me. There were lots of other cool cassette labels in 1996-1999 that just all kinda died out. Pass The Buck, Mindkill, Heroes For Today (which was run by Seth Bogart) & My Room Records–which eventually put out a few records and CDs. (so did Seth as Super 8 Underground) But we would all trade our releases and distribute each other’s stuff. It was really fun and very cool. I had started to put stuff together for a 7″ comp. but it was never released. I focused on distro for a long time and did a few spoken word tapes and music comps here and there. I totally stopped doing it completely in 2003 or 2004. Way after everyone else had already stopped doing theirs and moved on to other things. But I really had a lot of fun doing it and I really miss it!

What kind of zines do you make? 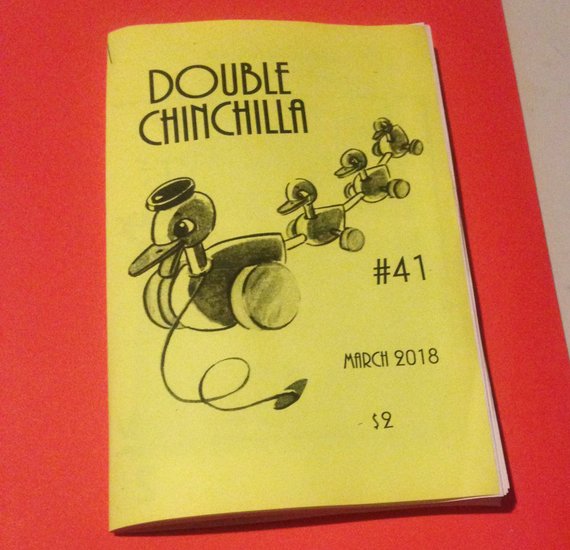 What inspires you to create zines?

Other people’s zines/books/writing always seems to spark something in me! Whenever I read a good book or just read something that I can relate to–it inspires me to write about it or something similar that I have experienced. Inspiration can come from anywhere–TV, dreams, or just reading my old journals! (Or even something that I wrote about in a zine in the past that I feel differently about now)

What’s your favorite thing about zines?

My favorite thing about zines is being able to connect with so many different kinds of people from so many different places…. I grew up in a very small town and most of my friends weren’t into ANYTHING that I was into and that’s why I started pen-palling. I was lonely. I felt lonely a lot when I was younger and being able to be part of the zine community made me happy. It was exciting to feel like I was part of something.

Do you recall your first zine ever, what was it about and what inspired you to create it?

I made a few zines that I never finished or never printed in 1995 and 1996! The very first one was called “LintBaby”(I think before that name I planned to call it “Kinderwhore” and before THAT,”Punx For Hire”) I remember a lot of the writing was about the same things everyone else was writing about in the zines that I read in the 90s! Riot Grrrl, Barbie, Hello Kitty, Bettie Page and high school.

Another one was called “Space Patrol” and I interviewed Bis and Emily’s Sassy Lime for it but I never printed it. I had started a distro (Dead Meat Distro– which later became Ego Records) and I put the interviews in a catalog! So the first zine that was actually published was called “Veronica Lodge” and it came out in 1997. It was mostly interviews and reviews. The first personal zine I did was in 1998 and it was called “Babelicious”.

I was inspired by the many Riot Grrrl zines that I discovered in those years. Since I didn’t do a zine at first, I had started doing spoken word and I made cassettes to send to zinesters as trade for their zines! Eventually I was brave enough to do my own zine.

Tell me a little about your zine-making process.

But I usually start out by making an outline of the zine and I list what I want to include in it. I take a lot of notes and write down all of my ideas before I even begin to start the writing for the zine. One of my favorite things has always been making a zine cover! As silly as that may sound, I plan those out way ahead of the actual zines–I always do the cover first!

And I have to be in the mood to write; otherwise it just seems like a chore. I usually set a deadline for myself and then bang out all of the writing in a week or sometimes in a few days! So it’s also “lazy”. My zine-making process is slow and lazy!

What do you hope people get out of your zines?

When it comes to the interview and review zines, I do those to help get the word out about other people’s projects. So just INFORMATION is what I hope people get from those zines. As far as my personal zines go, I just hope that people can relate to what I am writing about….I have written a lot about mental health, anxiety, depression and addiction. I just hope that readers can at least feel like they are not alone when reading the stories that I share about the struggles I have faced throughout my life. That’s also why my favorite zines are personal zines, because I do get a lot out of reading other zinesters’ per-zines.

Name two of your favorite zinesters.

This is a really hard question to answer! I know and have known so many great writers and zinesters over the years! One of my favorites has always been Aaron Cometbus. I always admired the way that he could make you feel like you were there with him and he makes you feel like you know the people that he writes about–I aspire to be able to write like that but I have never been able to pull it off! So that’s one of the main reasons that I like his zines so much. I’m actually not a very good writer…

Another favorite is Sophie McMahan. She does a comic called “Dreaming of Johnny”. I guess she’s more of an artist than a zinester–but comics and art zines are just as important as other zines. I love and admire all of her work.

Do you have any advice for new zinesters?

My advice would just be: don’t get discouraged if someone doesn’t like your zine or if you get a bad review. To be honest, that’s one of the reasons that it took me so long to do a zine in the first place, or why I quit doing zines a few times over the years. I felt like my writing wasn’t good enough or that people just didn’t like my zine. It doesn’t matter. Do your zine for YOU. Your zine is whatever you want it to be, you will find your readers/audience. So don’t get all hung up on what other people think about your zine, like I always did!

Check out this weeks “Meet This Zinester” with @iesorno one of the coolest Zinesters I know. Please go read, get inspired, and then make zines! Link in bio 👽 . . . #weirdobrigade #meetthiszinester #zinester #zinesters #zines #zine #create #art #creativity #artzine #zinecommunity #artistsoninstagram #zinemaking #zinecultural #zineart #supportthearts #selfexpression #iestyn #iesorno #zines
Putting together a band! I wanna sing about zines and all the things I love ❤️ peep the stickers 🎸 . . . . #weirdobrigade #zines #zine #zinesters #zinester #zinemusic #musiczine #music #band #warshipzine #stickers #creativity #createmusic #musiciansofinstagram #quimbysnyc #create #supportthearts #selfexpression #musicislife #artislife
Hello my zine friends! I have been super MIA from the world of zines— Meaning I haven’t been doing interviews or making zines. This is due to life getting in the way, having to look for a new job, and dealing with the changes and the emotional stress. However, I’ve been slowly getting back into it all. My friend and I made these cute little zines a couple of weeks ago! And I also have another ‘Meet This Zinester’ interview that I will be posting this week. Stay tuned for @iesorno interview! 🙌👽 . . . . . #weirdobrigade #zine #zines #minizine #minizines #art #creativity #create #creation #zinesters #zinester #zinecommunity #writingcommunity #artcommunity #writersofinstagram #zinestersofinstagram #artistsofinstagram #artsandcrafts #expressyourself #supportthearts
My friends are live on twitch playing resident evil 1 hd remake. Go watch! Link in bio . . . . #weirdobrigade #gaming #onlinegaming #pcgaming #pcgamer #pcgamers #residentevil #residentevil1 #residentgame1 #gamer #gamers #videogames #videogameslive #twitch #twitchstreamer #gaminglife #residentevilgames #residentevilgameplay #twitchgamer #videogame #videogamer #videogamesforlife #games #courtesypost #gaminglifestyle #gamingislife #videogamer #playgames #onlinevideogaming #pcgames