In today’s installment of ‘Meet this Zinester’ we meet the awesome creator of many zines (ranging from the political to the personal), 31-year-old Richard E Larios. Larios is from Los Angeles the South Central/Watts area. He has been making zines for a very long time. So stick around, get inspired, and then make zines~ 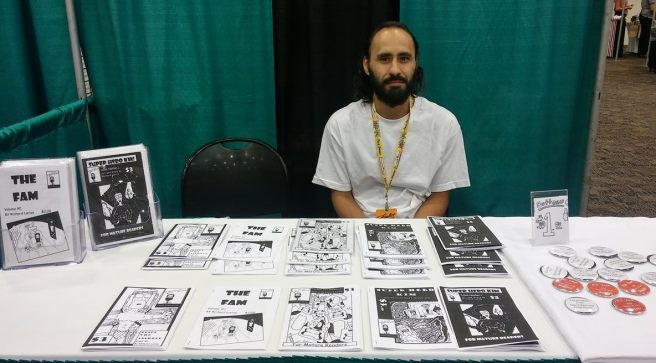 Who is Rich?
A working class Joe born of two migrants that came to the US from Nicaragua. If I had to sum myself up it’d be husband, vegan, anarchist, storyteller, and warehouse worker, and yes in that order.

What are zines to you?
Zines are a way for working class people, and other marginalized beings, to share their truth, their perspective, ask their questions, and than distribute them without going bankrupt. The only time I ever read about mania from a being that suffers from it, was through a zine.

What kind of zines do you make?
I make comic zines that are one of three, 1. political, 2. comedic, and 3.personal. They are a way for me to deal with ideas and feelings. So it definitely is a form of activism, but also a way for me to take care of myself. A lot of times zines that I make start somewhere dark, and by the end of them I’m able to breath again.

What inspires you to make zines?
I’ve been making zines for a long time, but as an adult I got back into them when I realized that it was the only true way that I could create and continuously create the heroes that I wanted to see, spread the ideas that I felt needed to be spread, and lastly the only way I could speak to and for my community.

Tell me about Feral Publication.
Feral Publication is just the name that I use. I aim to disrupt and confront the status quo and support those doing the same. It is my poor attempt at building a brand that people can trust to not water anything down and to hold BS accountable. To stand for something and to be in solidarity with causes that aim at elevating the human existence as well as that of the other beings that we share the world with.

What do you hope people get out of your zines?
It depends on which one, if it’s one of my political comics, that for them to grasp the ideas, you don’t have to agree but at least understand where i’m coming from, if it’s my comedic ones, then a chuckle, if not a gut busting laugh, and the personal is just meant to create a sense of solidarity. You ain’t alone!

Tell me a little about your zine-making process.
Well, like I said, it usually starts with an outrage, or an emotion, or the comedy of life that gets me going. After that I write out the story, the idea, the feeling, the joke, and then I do what other comic book creators do. I thumb nail and than pencil, ink, and so on and so forth.

Name 2 of your favorite zinesters. Why would you recommend them for others to check out?
I seriously love this question! I read so many zines that I wouldn’t know where to start. If it’s just two then I have to go with VEEK! That zinetser is so dope. She makes these over the top comedic comic zines that are absurd realism. She has a working class dynamic that is key to winning my heart in a story. And secondly, it would have to be Monstieur. That zinester has honestly captured the working class of this generation so well.

Aside from your zines, you also have a youtube channel. Tell me about it.
I review zines, indie music, and other art, as well as interviewing indie creators. I do that from the perspective of a radical and that’s how I talk about the texts.

Do you have any advice for new zinesters?
Create. It’s self care, as well as it can help others. We need more of that, cause information is becoming more and more centralized, and zine creating is a way of de-centralizing it.

Stay tuned for next weeks ‘Meet this Zinester’ with Veek, creator of many dark humor comic zines.

Check out this weeks “Meet This Zinester” with @iesorno one of the coolest Zinesters I know. Please go read, get inspired, and then make zines! Link in bio 👽 . . . #weirdobrigade #meetthiszinester #zinester #zinesters #zines #zine #create #art #creativity #artzine #zinecommunity #artistsoninstagram #zinemaking #zinecultural #zineart #supportthearts #selfexpression #iestyn #iesorno #zines
Putting together a band! I wanna sing about zines and all the things I love ❤️ peep the stickers 🎸 . . . . #weirdobrigade #zines #zine #zinesters #zinester #zinemusic #musiczine #music #band #warshipzine #stickers #creativity #createmusic #musiciansofinstagram #quimbysnyc #create #supportthearts #selfexpression #musicislife #artislife
Hello my zine friends! I have been super MIA from the world of zines— Meaning I haven’t been doing interviews or making zines. This is due to life getting in the way, having to look for a new job, and dealing with the changes and the emotional stress. However, I’ve been slowly getting back into it all. My friend and I made these cute little zines a couple of weeks ago! And I also have another ‘Meet This Zinester’ interview that I will be posting this week. Stay tuned for @iesorno interview! 🙌👽 . . . . . #weirdobrigade #zine #zines #minizine #minizines #art #creativity #create #creation #zinesters #zinester #zinecommunity #writingcommunity #artcommunity #writersofinstagram #zinestersofinstagram #artistsofinstagram #artsandcrafts #expressyourself #supportthearts
My friends are live on twitch playing resident evil 1 hd remake. Go watch! Link in bio . . . . #weirdobrigade #gaming #onlinegaming #pcgaming #pcgamer #pcgamers #residentevil #residentevil1 #residentgame1 #gamer #gamers #videogames #videogameslive #twitch #twitchstreamer #gaminglife #residentevilgames #residentevilgameplay #twitchgamer #videogame #videogamer #videogamesforlife #games #courtesypost #gaminglifestyle #gamingislife #videogamer #playgames #onlinevideogaming #pcgames