For this weeks installment of ‘Meet this Zinester,’ we get to meet the awesome musician/music enthusiast/music Zinester, Steve Blank. He is a 36-year-old lad from Stockton-on-Tees (England), who created Point Blank Teesside.

When did you first learn about zines and what was your reaction to them?

My first contact with fanzines was when I got into punk music. There was a fantastic zine called ‘Fracture’ which did interviews/reviews/columns etc. This was just before the Internet started to take over (haha!) so people still very much relied on them as a means of discovering stuff that wasn’t in the everyday music press.

When did you start making zines and why?

I started making a zine in 2009 called POINT BLANK POZNAN in Poland as I lived there for many years. The idea came about because I was playing in a band there and realised I had stopped going to gigs except ones we were playing. Making it gave me motivation to get back out to other events. The name stemmed back to the idea me and my mate had when we were 16 and wanted to make a zine about politics called ‘POINT BLANK’.

How long have you been making them?

Be almost a decade now.

Tell me a little about Point Blank Teesside? What’s it about? Are they free? Where can people get copies?

It basically focuses on local music in and around the Teesside area. It’s totally free and you can get copies at pubs and gigs or via post. It’s available on PDF too (that’s the kind of cool people we are). 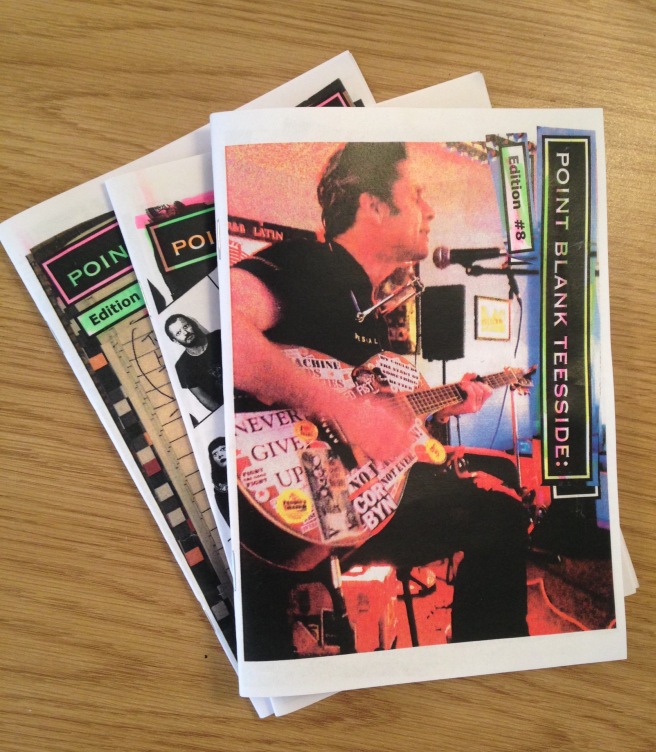 Can you name some of the bands you have interviewed?

As the zine focuses on the Teesside area rather than one specific genre, I tend to interview smaller, local acts. Of course the bonus of this is I get to speak to a huge mixture of bands and not just one type.

But The Vibrators are a big name to have featured, and I’ve also interviewed Tim Oxnard and Avalanche Party who are both extremely well-respected in the local scene and nationally. Perhaps the biggest name is John Lydon of The Sex Pistols and Public Image Limited. My mate does a show for Radio Afera in Poznan, Poland (where I used to live) and he managed to bag an interview with him. The kind people at Radio Afera let me transcribe it and use it in my POINT BLANK POZNAN zine. That was class as it’s not every day you get to stick John Lydon on the front page.

Which band was your favorite interview?

Well some of the interviews are done Q&A style via email and some are done around a pub table and get written up as an article. I guess one of my favourites was interviewing Echolines as I went up to Newcastle by train to watch them rehearse then we went for a nice drink afterwards and did the interview. Very civilised!

Is it hard to get bands to agree to an interview? How do you usually approach them?

How do I approach them? Usually half drunk after a concert! Nah, it’s very easy and the majority of bands are more than happy to do it. I even get acts contacting me these days asking to be featured.

Tell me a little about your process when making zines? How do you come up with ideas for them? Do you print them out yourself? Is it just you or do you have a team of people who help you make them?

I make the zine myself. I draw up the list of contents, collect it all in, and put it into InDesign. Then, once a PDF is printed out, it’s cut and pasted together for a more ‘authentic’ look.

How has making zines impacted your life?

Since moving back to the UK from Poland a year ago, making the zine has provided me with a great way to get involved in the local scene. I don’t play in a band at present, so this is my contribution. But it’s also helped me get out there and meet so many great people and make friends – something I was worried about doing after having been away for so long.

Name two of your favorite zinesters whose work has inspired you?

I guess a big inspiration would be Rob Nichols, who produces Fly Me To The Moon (FMTTM) – a football (soccer!) fanzine for my local team. It has a real DIY spirit to it and reading it before the game used to be a big part of the whole ‘match day experience’.

Sophie Ruth Ascough who has just started writing for POINT BLANK TEESSIDE is pretty cool too as she makes her own little zines out of folded up pieces of A4 paper. Doing it that way means nobody has an excuse for not having a go.

Do you have any advice for anyone who is just getting into zines and wants to start creating them?

Hmmm… Just throw yourself into it and do it. I sometimes find people are reluctant to pen stuff or are nervous about submitting it as they say they’re no good at writing. But at the end of the day, it’s a fanzine, written by fans for other fans – it’s not going on sale to millions of people.

What else do you do aside from making awesome zines?

I try to swim and play badminton as much as possible to keep fit haha! I also enjoy films and socialising with mates in the pub too. I feel like I’m updating my Tinder profile…

Stay tuned for next weeks, ‘Meet this Zinester’ with Wizard Skull, creator of various art zines, including Pussy.